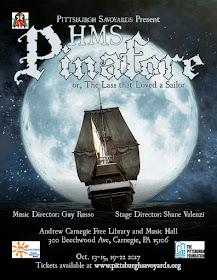 The Pittsburgh Savoyards sail into their 80th season with one of Gilbert
and Sullivan’s most beloved shows, HMS Pinafore.

Stage directed by Gilbert and Sullivan expert Shane Valenzi, Pinafore will run for two weekends, Oct. 13-15 and 19-22 at the Andrew Carnegie Free Library and Music Hall, 300 Beechwood Ave, Carnegie, Pa.Resident Music Director and Conductor Guy Russo will lead the ensemble and orchestra.
All shows begin at 8 pm except on Sundays, which begin at 2:30 pm.

For the first time, the company now offers premium seating at the venue in Rows D, E,
and F for an additional $5.00 on the ticket. Additionally, those who order tickets by Oct. 9 can
take advantage of the special early bird discount. Prices can be found on the production’s
Showclix page.

Local non-profit organizations have the opportunity to apply for limited blocks of free
tickets to any of the performances. Interested organizations can direct inquiries to
information@pittsburghsavoyards.org or call 412-734-8476. If the number of applications exceeds the amount of available tickets, non-profits with an
educational mission will take precedence.
T
he company invites all attendees of the opening night performance to attend a free
reception, scheduled to immediately follow final curtain call. There, audience members can
celebrate the show’s opening over food and wine with the cast, crew, orchestra, and Board of
Trustees.

All attendees of the first Sunday matinee (Oct. 15, 2017) are invited to attend a British
Tea upstairs in the Lincoln Gallery from 1 pm until the performance starts at 2:30pm. The ticket
is combined with a ticket to the show, and prices can be found online on the Pittsburgh
Savoyards website. The Tea will be catered by John Marshall Catering.

In Gilbert and Sullivan’s commercially and critically acclaimed operetta, the British ship
H.M.S. Pinafore is currently docked at Portsmouth as the ship’s merry crew of proud English
sailors attends to their usual duties. One sailor, the handsome Ralph Rackstraw, reveals to his
shipmates that he is in love with Josephine, the daughter of Captain Corcoran, the captain of their
ship, despite the problem that society prevents him from marrying someone above his station.

Unbeknownst to Rackstraw, Josephine suffers from the society’s issue, wishing to marry Ralph
instead of Joseph Porter, the pretentious “ruler of the Queen’s Navy.” Even after loud opposition
from fellow sailor Dick Deadeye, the crew supports Ralph and Josephine’s forbidden union,
sneaking around in the dead of night to escape notice from Corcoran and Porter while Corcoran experiences his own forbidden love interest budding between him and
Little Buttercup, a hearty lower-class woman guarding some secrets of her own. In the end, the
power of love triumphs over societal rank in life, fulfilling the promise of a happy and hilarious
ending.

The Pittsburgh Savoyards is a 501(c)(3) non-profit theatre group founded in 1938 whose
mission is to honor and perpetuate the works of 19th Century English composing duo Sir William
S. Gilbert and Sir Arthur Sullivan. Using funds raised from ticket sales, fundraising events, and
donations from generous patrons, the Savoyards perform two Gilbert and Sullivan productions
per year, one in fall and one in spring.

The shows feature a talented mix of both amateur and
professional performers from the Greater Pittsburgh Area. In addition to its stage productions,
the group organizes numerous community outreach projects to bring the rich heritage of Gilbert
and Sullivan to people of all ages, emphasizing the timelessness of the duo’s whimsical tales and
charmingly lighthearted music. A partner of Britsburgh since 2017, The Pittsburgh Savoyards is
an ARAD asset and is also supported by the Pittsburgh Foundation.


Fact Sheet
 The Pittsburgh Savoyards is a non-profit theatre company based in the Pittsburgh
community, founded in 1938.

 The group’s name comes from the Savoy Theatre in London, where many of the
operettas originally premiered.

 The current President of the company’s board of trustees is Andrea Carriker. Vice
President is Casey Ciocco, Secretary is Andy Hickly, and Treasurer is Lynette Garlan.
Board members serve two terms with alternating election years.

 A reception will follow the opening night performance. Those who attend the
performance are invited to attend.

 Pinafore is the fourth collaboration between W.S. Gilbert and Arthur Sullivan. The comic
opera originally debuted May 25, 1878 at the Opera Comique in London.

 The production ran for 571 performances, which up to that time was the second longestrunning
production ever.

 Pinafore debuted illegally in the United States at the Boston Museum on November 25,
1878. Approximately 150 illegal productions of the operetta went up in the U.S. between
1878 and 1879.

 Some of the unauthorized versions of the show consisted of changes to the original
material into new forms, such as burlesque versions, children’s versions, foreign
language versions, and more.

 The production is considered one of the Gilbert and Sullivan “Big Three,” alongside
Pirates of Penzance and The Mikado as the duo’s most well-known and best-loved
operettas.

 The music of HMS Pinafore has often been referenced in popular culture. Certain classic
songs have made their way into episodes of The Simpsons, Family Guy, How I Met Your
Mother, Animaniacs, etc. and into movies such as Raiders of the Lost Ark, Chariots of
Fire, and Star Trek: Insurrection. A song from the production is also briefly referenced in
the video game Mass Effect.
David Zuchowski at 8:10 AM
Share