Quantum Delves into the AC/DC Conundrum 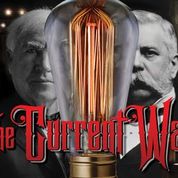 The thing about going to a world premiere is you’re able to go into the theater tabula rasa, with a blank slate and little in the way of foreknowledge. Take Quantum Theatre’s latest live and outdoor production, “The Current War,” as nearly post-covid as you can get with all the safety protocols still in effect. I went in knowing very little about what I was about to experience.

Actually, when the flyer for the musical written by Pittsburgh native, Michael Mitnick, arrived in the mail, I read the title and thought, current war? What? Afghanistan,? Syria?

Reading further on I saw the play focuses not on armed conflict but on the” power” struggle between two of the turn-of-the-last century powerhouses. Be entertained with song and script as entrenched inventor, Thomas Edison, strongly promotes his DC current to light the nation’s cities while Pittsburgh entrepreneur, George Westinghouse, pushes for an electrical grid that uses his alternative, alternating current. The war gets going.

I was sure I was going to use the word electrifying somewhere in my review, but quickly discarded the notion. Not only is it a bit trite and obvious but I was sure other critics would have already done something similar in their reviews. While imitation may be the sincerest form of flattery, copy cat-ism is not for me.

After seeing the world premier production, I decided it would have been an inappropriate use of the word as well, because the show is done in a sort of silent movie style with scenes announced by placards carried across the stage by a mobile actor. Nothing that electrifying here. These signs that preamble the various scenes whiz by quickly and are similar to the written entr’acte cues of the cinematic era of Norma Shearer, Clara Bow and Rudolph Valentino that announced a new theme or narrative update to the films. It is an apt devise for a musical in which one of its major characters actually invented motion pictures.

The play opens in a flash with all 9 actors appearing on stage wearing boxing gloves and sparring with the air. Each subsequent scene is punctuated by the same ringing sound of the bell you get between rounds of a boxing match. One scene is equivalent to one round.

The conflict between Edison and Westinghouse is the main focus of the plot, but there are other smaller clashes embedded in the story line as well. Westinghouse, played by an amiable Billy Mason, is often at odds with his headstrong, sometimes forward wife, Marguerite (Melessie Clark).

Alfred Black (Tru Verret-Fleming ) may have been a dentist but he obsessively canvasses (and beleaguers) both inventors to adapt their electrical technology into what he feels is a more humane instrument of capital punishment than hanging, namely, the electric chair.

The most grievous tussle depicted in the script is between William Kemmler (Jerreme Rodriguez) and his wife, played admirably in this and two other roles by Drew Leigh Williams. During an intense bout with the bottle, the troubled and drunken Kemmler goes on to dispatch his adulterous spouse with a hatchet, Lizzy Borden style. For this he earns the distinction of being the first prisoner executed in Old Sparky, as the devise went on to be nicknamed.

But first things first and back to Edison (played solidly in a role expertly nuanced by veteran Pittsburgh actor, Daniel Krell). The world-famous inventor is somewhat removed from his usual lofty pedestal in the musical, showing a bit of his mercenary side and aggressive competitiveness. Wanting to discredit Westinghouse’s AC current, he tries to show just how dangerous it could be in a home setting by electrocuting a series of dogs, then a horse, (inventively done on stage) and finally a gorilla, mimicked with unbelievable skill by Rodriguez as the unfortunate simian.

Initially, Edison proudly proclaims that he never invented a weapon or instrument of destruction. But, as one wit so cleverly put it, “Final resolutions are made in a state of mind that will not last.” Edison eventually succumbs to temptation and constructs the killing machine.

History records that the first execution did not go well. For the first 17 seconds of the ultimate ordeal, 1000 volts of AC current rendered Kemmler unconscious but did not kill him. A second attempt took place after the generator recharged and sent 2000 volts pumping through his body.

Wikipedia reports that blood vessels under his skin ruptured and bled while areas around the electrodes singed. The entire electrocution took about 8 minutes. Westinghouse later commented that “They could have done better using an axe.”

Yes, the play does have a dark tone that is especially intense in the foreplay that precedes Kemmler’s execution. Fortunately, the musical components are light and lively for the most part and surprisingly well accompanied by a duet of only a cello (who’d have thunk?) and keyboard under the direction of Douglas Levine. Credit cellist Simon J.C. Cummings for some exceptionally sonorous and mellow melody that meshes well with Levine’s work on the ivories.

Fittingly, the production takes place in a large tent on Westinghouse’s former 10-acre estate, now known as Westinghouse Park. His 1871 manse, Solitude, is now gone, but park officials are now actively seeking recognition of the extant park as a certified arboretum. (Be sure to check out on the grounds the huge, majestic tree whose species is unknown to me on your way to pick up your tickets).

Director Tome Cousin makes creative use of the entire expansive stage graced by a rather minimalist set designed by Tony Ferrieri with dashing period clothing by costumier Karen J. Gilmer. I’d be terribly amiss if I neglected to mention another outstanding performance by Quinn Patrick Shannon as Edison’s nominal assistant and mathematic whiz kid. In supporting roles, Connor McCanlus and J. Alex Noble also deserve kudos for their spirited performances.

On the drive home I discussed with my theater mate whether the material as presented deserves Broadway treatment. The general consensus is that it does, and I now await a possible opening on the Great White Way. In any case, see it here and now at Quantum if my expectations fall as flat as a Big Apple brownout.

“The Current War,” a production of Quantum Theatre, is at Westinghouse Park, 7051 Thomas Boulevard in Pittsburgh through June 27. While the show is sold out, prospective patrons may access a digital recording of the musical from June 12 - 27. Digital tickets are $20, and your link will grant you on-demand access to the performance for 72 hours. More information and the link to purchase:  https://quantumtheatre.secure.force.com/ticket/#/instances/a0F6S00000jZ8ytUAC

There is also the option to join a waitlist for live tickets:

Credit all Photos: Heather Mull
Posted by David Zuchowski at 10:22 AM

Dave Zuchowski has been writing about travel for twenty-five years, and his articles have made the pages of many newspapers and magazines across the country, including the Pittsburgh Post-Gazette, the Tribune-Review, the Erie Times, the Hartford Currant, the Fredericksburg Free Lance Star, AAA, Pathfinders, West Virginia Magazine, Southsider, and Westsylvania. For ten years, he was the travel correspondent for the 86 newspaper consortium, Community Newspaper Holdings, Inc., and his travel articles are posted to the cnhinews.com website. His travels have taken him to Europe seven times, to Mexico several times, to the Caribbean, Costa Rica, almost all of Canada's provinces from Newfoundland to British Columbia and Vancouver Island and all 50 US states. Some of his favorite places are the Cote d'Azur, California, Portugal, France, Oregon, Mexico, Napa and Sonoma, New England and Quebec - both the city and province. In his travel writing, his interests include history, food and wine, entertainment, general attractions, museums, recreation and adventure travel, spas, resorts, inns and hotels, festivals, architecture, theater, and more In his spare time, he also puts his horticultural interests to good use on his 15-acre farm located near Centerville, Pa where he grows berries, vegetables and fruit. His favorite past times are exploring new wines and cuisine, watching film, both vintage and recent, theater, baseball (Pirates and Wild Things), the Steelers, history and architecture and just plain old lying around doing nothing more than thinking. and relaxing. Go Pens!